Following that, two of his bandmates (past and present) joined the social network. After making the rounds with Nathan Apodaca (the skater who got the song to go viral in the first place), that was it for the drummer.

However, in a new interview with Rolling Stone, Fleetwood has reemerged with some interesting tidbits. Firstly, following the death of original Fleetwood Mac guitarist Peter Green, the drummer said he got in touch with ousted guitarist Lindsey Buckingham. If you forgot, Buckingham was booted from the group in 2018 and wasn’t very happy about it. He was replaced by Heartbreakers guitarist Mike Campbell and Crowded House’s Neil Finn.

“I’ve really enjoyed being re-connected with Lindsey, which has been gracious and open,” Fleetwood said. “And both of us have been beautifully honest about who we are and how we got to where we were.”

Of course, you’re probably thinking the inevitable “will Lindsey Buckingham will rejoin Fleetwood Mac again?” Well, Fleetwood had some interesting things to say about that.

“Strange things can happen,” Fleetwood told RS. “I look at Fleetwood Mac as a huge family. Everyone plays an important role in our history, even someone like [early ’70s] guitarist Bob Welch, who was huge and sometimes gets forgotten. Lindsey’s position in Fleetwood Mac will, for obvious reasons, never been forgotten, as it should never be forgotten.”

Like all things with Fleetwood Mac, Buckingham’s return isn’t that simple. Buckingham was booted due to his deteriorating relationship with Stevie Nicks. As Fleetwood notes, as much as he’s interested in working with the guitarist, Buckingham and Nicks would have to put their differences behind them if Buckingham is to return.

“I can’t speak for the dynamic with Stevie and him,” the drummer said. “I don’t even need to protect it. It’s so known that they’re chalk and cheese in so many ways, and yet not.”

But Swift isn’t laughing about the jab at her love life, which contains the punchline “You go through men faster than Taylor Swift.”

The “You Need To Calm Down” singer clapped back on social media saying, “2010 called and it wants its lazy, deeply sexist joke back. How about we stop degrading hard working women by defining this horse shit as FuNnY.”

She added her own zinger at the end: “Happy Women’s History Month I guess.”

A few days previously, in a post titled “I miss you terribly and can’t wait til we can all safely be at shows together again,” Swift shared the news that she won’t be able to reschedule her live show shows, which were (obviously) postponed due to the pandemic.

Swift’s new record, a re-recording of 2008’s Fearless with bonus tracks, will be out April 9. The new 26-track version of the LP will feature six never-before-released songs she wrote as a teenager.

Nirvana’s Bleach to Be Reissued as Limited-Edition Blue Cassette

The Blew edition (pressed on a cobalt blue tape) commemorates the album’s opening track and will be limited to 1,989 copies, in honor of its release date.

The Tapehead City description of the release reads as follows:

“Bleach” was the debut album from Nirvana released on June 15, 1989, by Sub Pop records. “Blew” was the first song on the album and one of the few songs Nirvana would continue to play on tour. “Blew” was also the 2nd to last song Nirvana ever played at their final show March 1st 1994.

The Bleach version of “Blew” was accidentally recorded one step lower than the band had intended, which contributed to what Nirvana biographer Michael Azerrad called its “extraordinarily heavy sound.” Not realizing that they had already tuned to their favored Drop D tuning, the band tuned further down to Drop C on the first day of the sessions and recorded several songs in that tuning. As bassist Krist Novoselic recalled in a 2009 Seattle Times article, “we came back the next day and decided the idea wasn’t so hot, and we recorded over most of it with things tuned back up a little. In fact, ‘Blew,’ with that growly bass, is the only survivor of that experiment.”Novoselic also said that “Blew” was perhaps his favorite song on Bleach “because it has a groove, and again, it’s the sole survivor of the Doom Pop experiment.

Kurt Cobain died 27 years ago at age 27 which means he’s been dead for as long as he’s been alive. A sad and eerie fact. In homage of Kurt, his songs and the day Nirvana played their final show we bring you the “BLEW” edition, exclusively available at Tapehead City!

The cassette is set for a March 22 release and can be preordered here. 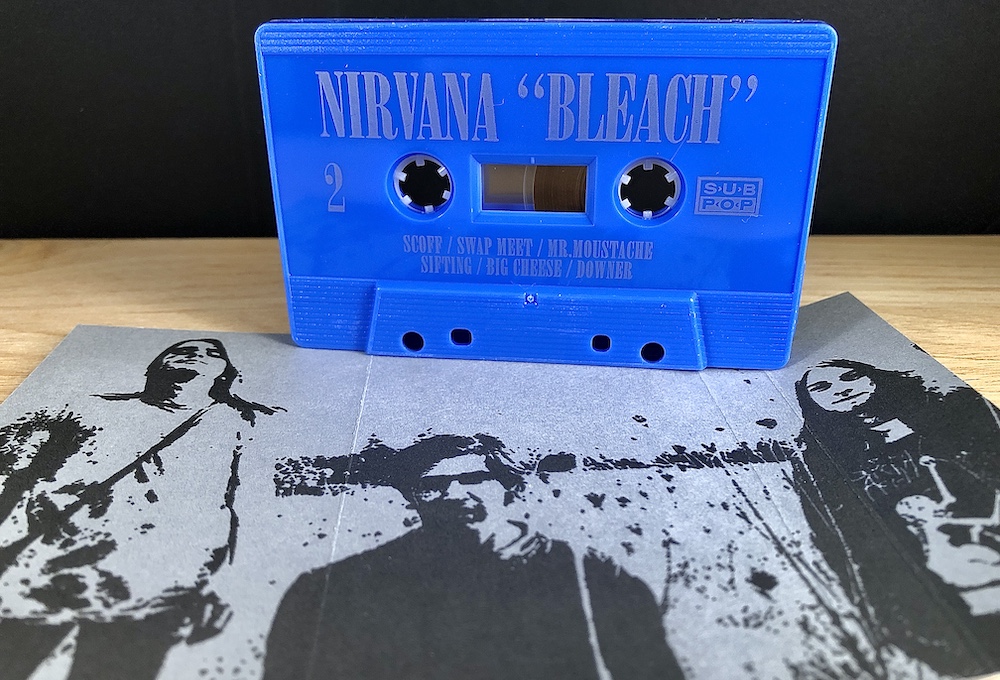 We recently named Nirvana our most influential artist of the past 35 years. Krist Novoselic spoke with us about the trio’s lasting legacy and reminisced about a show during the Bleach era when Cobain had to perform without his guitar for probably the only time in the band’s history. You can read our interview with Novoselic here.

On Sunday night, Reznor, Atticus Ross and Jon Batiste won the Golden Globe for Best Original Score for their work together on Soul, the excellent animated film from Pixar.

The trio beat out a field that included James Newton Howard for his work on News Of The World, Alexandre Desplat for the score for The Midnight Sky, the great Ludwig Göransson for composing Christopher Nolan’s Tenet and…themselves. Reznor and Ross were also nominated for their score for David Fincher’s Mank.

“I think this is the first piece of art I’ve ever made in my life that I can show my kids, so thanks, Pixar,” the Nine Inch Nails musician quipped in his acceptance speech. Reznor and Ross previously won a Golden Globe in the same category in 2011 for their work on The Social Network.

“We must follow our dreams because we only have one life to live and one soul,” Batiste said. “And this soul is happy today to be recognized by the Hollywood Foreign Press for this masterpiece of a film.”

Reznor and Ross took home an Emmy last year for their work on HBO’s Watchmen series.

BAFTA has revealed the nominations for the 2021 Game Awards, which will take place on Tuesday March 25. The Last Of Us Part II leads the nominations.

Naughty Dog’s revenge epic received 13 nominations, which is the highest number of nominations awarded for a game yet. The awards it was nominated for include the EE Game of the Year Award, Artistic Achievement, Technical Achievement, and Game Design.

Sony exclusives have swept the board for nominations, with Ghost Of Tsushima up for 10 awards, closely followed by seven for Marvel’s Spider-Man: Miles Morales, six for Dreams, and four for Sackboy: A Big Adventure.

Voting is now open for The EE Game of the Year award, with Animal Crossing: New Horizons, Call Of Duty: Warzone, Ghost of Tsushima, Hades, The Last Of Us Part II and VALORANT all making the shortlist.

The host of 2021’s Game Awards is Elle Osili-Wood, who took to twitter to break the news, saying: “It’s been an incredible year for gaming, so I can’t wait for you to see what we’ve got in store on March 25 – brush off your best black tie and celebrate!”

This has been such a difficult secret to keep, so I’m thrilled to finally announce it: I’m hosting the @BAFTA Games Awards!

It’s been an incredible year for gaming, so I can’t wait for you to see what we’ve got in store on March 25 – brush off your best black tie and celebrate! pic.twitter.com/SWf68M6QN5

The Last Of Us will soon be coming to TV screens in a new adaptation by HBO.

Pedro Pascal and Bella Ramsey have been confirmed to take on the roles of Joel and Ellie, respectively.

The post ‘The Last Of Us II’ leads the nominations for the BAFTA Game Awards appeared first on NME | Music, Film, TV, Gaming & Pop Culture News.