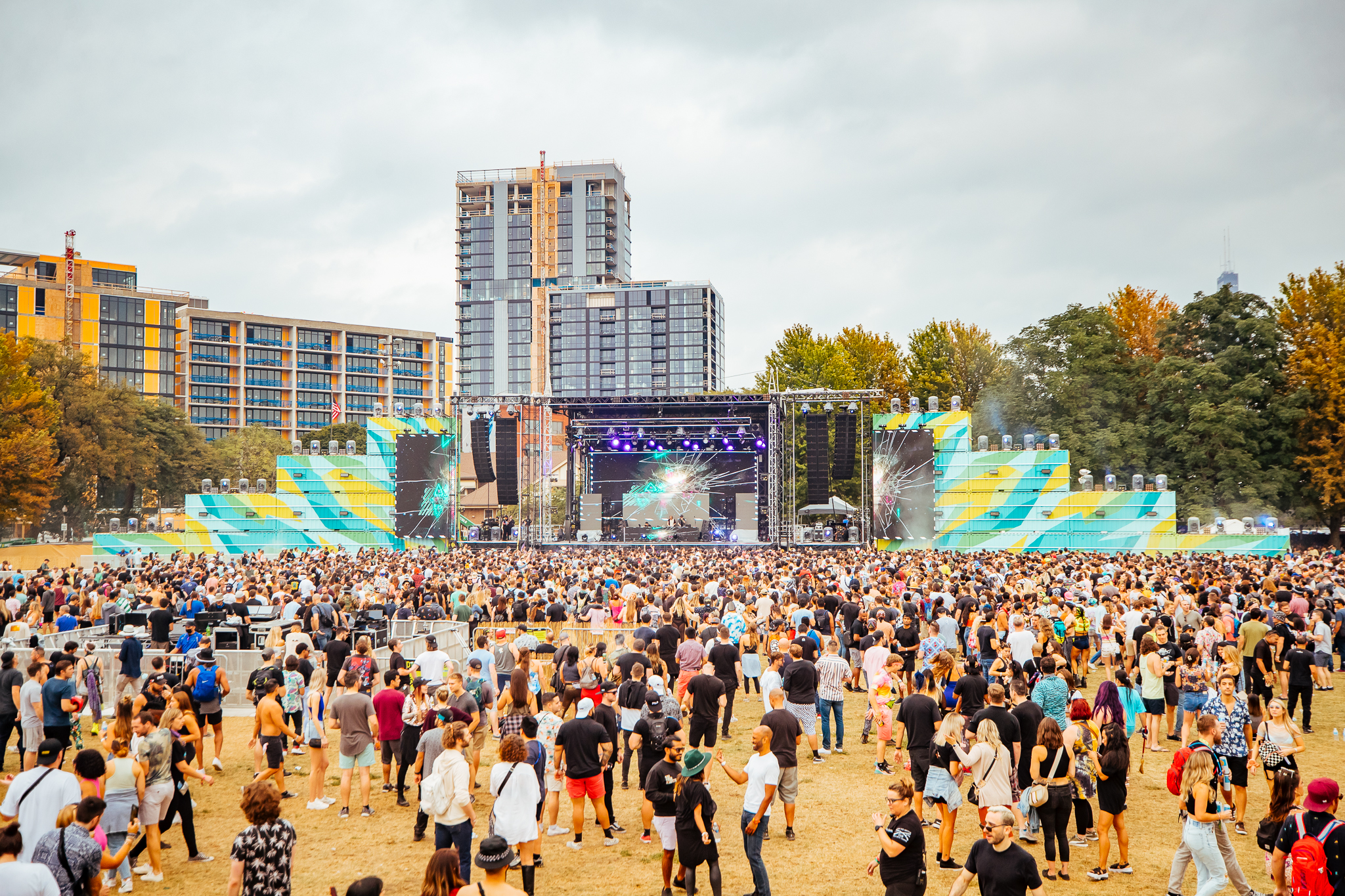 ABOUT THE FESTIVAL
The ashes of Disco’s black and queer culture in the late 70s laid the foundation for a new genre of dance music that was conceptualized in the clubs of Chicago, and thus house music was born. House is now a global phenomenon that can be attributed back to its Chicago roots and the decades-long careers of local DJs who pushed the genre in new directions. ARC festival was created to honor the invention of house in its birthplace and its debut on Labor Day weekend brought out locals and travelers alike. Perfectly timed in early September, the morning fog burned off into sunny days among well-decorated stages and impeccable sound systems. ARC Festival pulled off without a hitch, hosting local legends and some of the most well-known global acts, all while telling the story of Chicago’s rich history through house music. 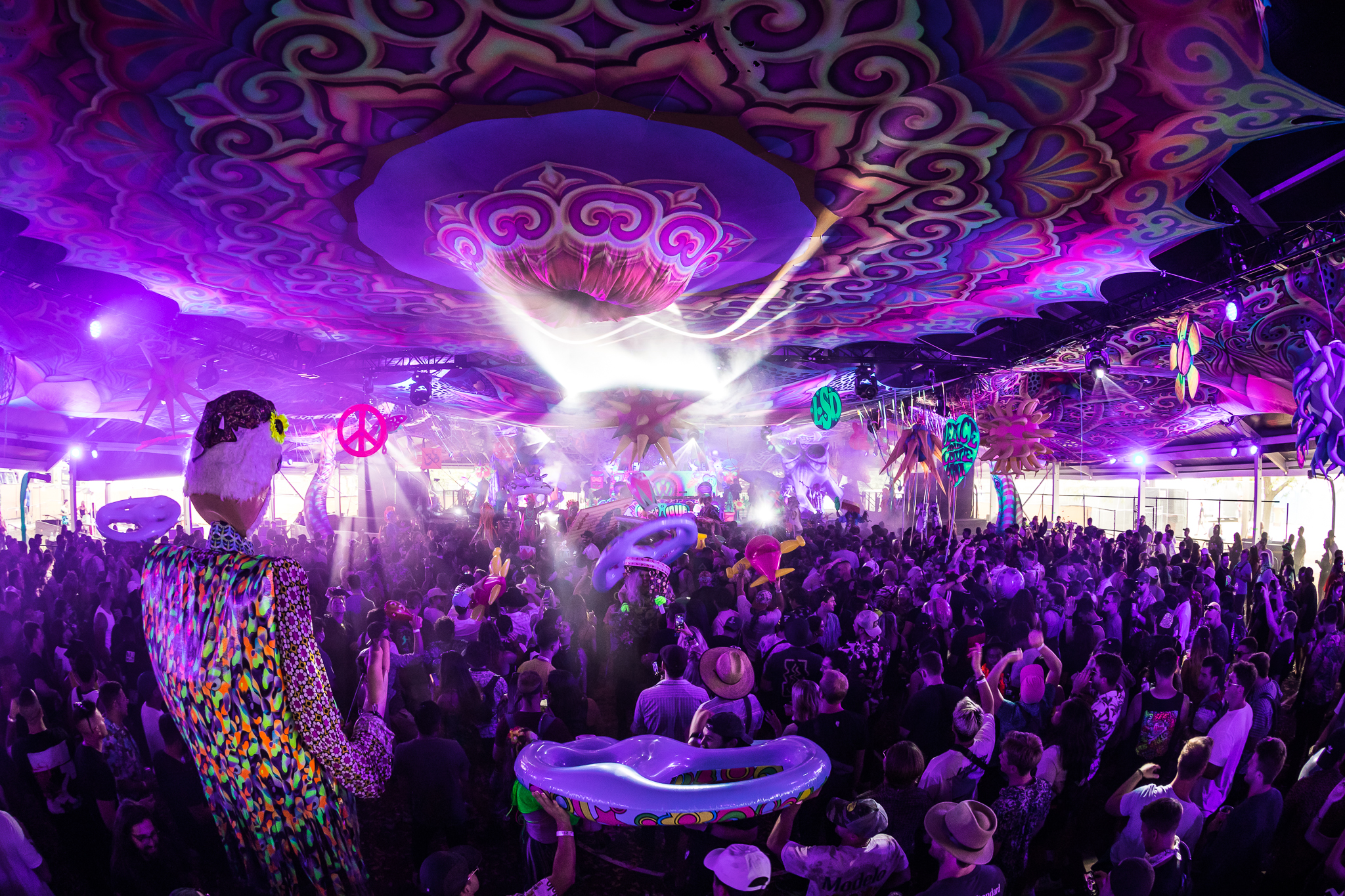 For a festival in its first year, casting a stand-out stage like elrow is no small feat. The Spanish events company is focused on hosting eccentric and psychedelic events for house and electric music. The LSD, alice-in-wonderland-esque stage was themed “psychedelic trip” and included a hippie van, giant bearded walkers in the crowds, dancers on stilts, a giant chicken and confetti cannons that burst on the hour. Booking a famous European stage was a testament to the distances house music has traveled since its conception in Chicago and gave a fun, foreign twist to the Midwestern festival. 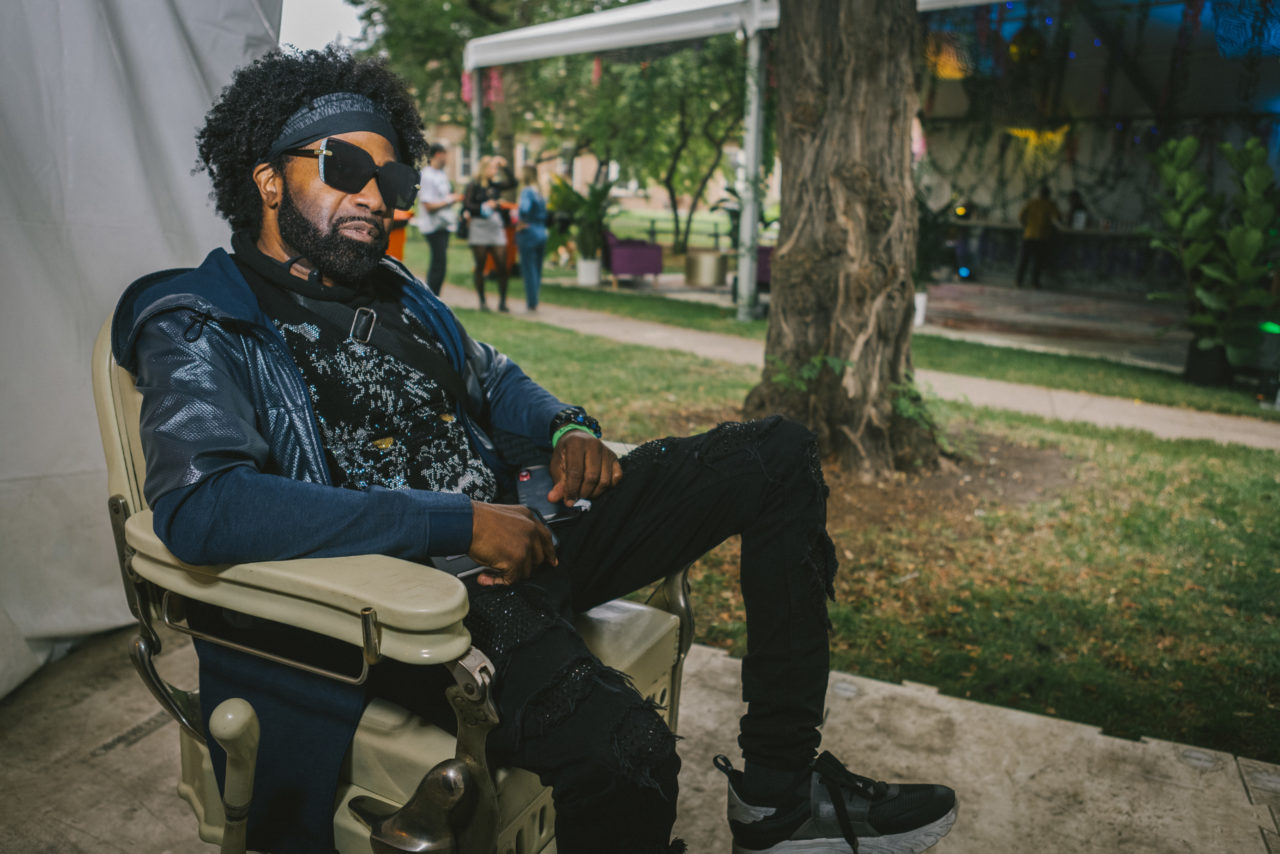 DJ Pierre delivered an ecstatic and trippy “acidic” day set on Saturday that brought out some of the most passionate and educated house fans to the stage. A legend in house and Chicago music history, DJ Pierre is a passionate and storied local who is personable and intentional about his music. DJ Pierre and his group Phuture created “acid house” because of the way they used the high-pitched Roland TB-303 synthesizer in their house that has since been co-opted and its influence has proliferated. Coming out in a true performance outfit, DJ Pierre was exceptionally personable and well dressed, performing in a headband, dark glasses and a jaguar-sequinned panther shirt that he was turned on to by his daughter who has her own fashion line. 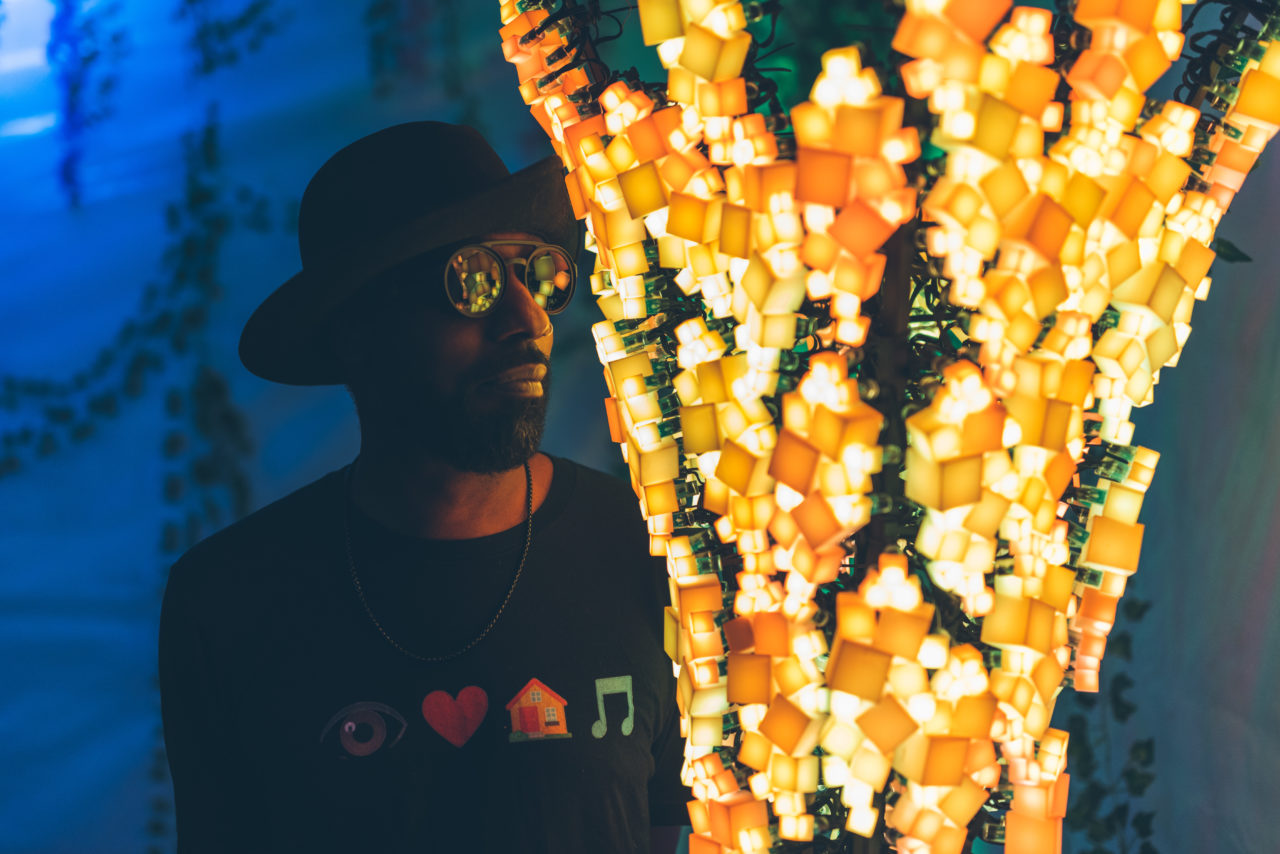 Even with three decades of DJing under his belt, Gene Farris still knows how to innovate musically and excite a crowd. Taking the famed elrow stage, Farris played hit after hit among the confetti cannons and stilted dancers. But backstage, Gene is sedate and genial in large, deep-tinted glasses and a wide-brimmed hat, advising newer artists not to make music for the trends if they want to stay relevant long-term. Gene recalls his first house shows thrown by Little Louis, described as “on of the Godfathers of house music” who threw all ages house parties at the Cadillac hotel and gave a young Gene Farris his first experiences with the genre. Although Gene frequents Chicago set lists, his presence at a festival like ARC is a salutation to the intentions the festival has for coming years. 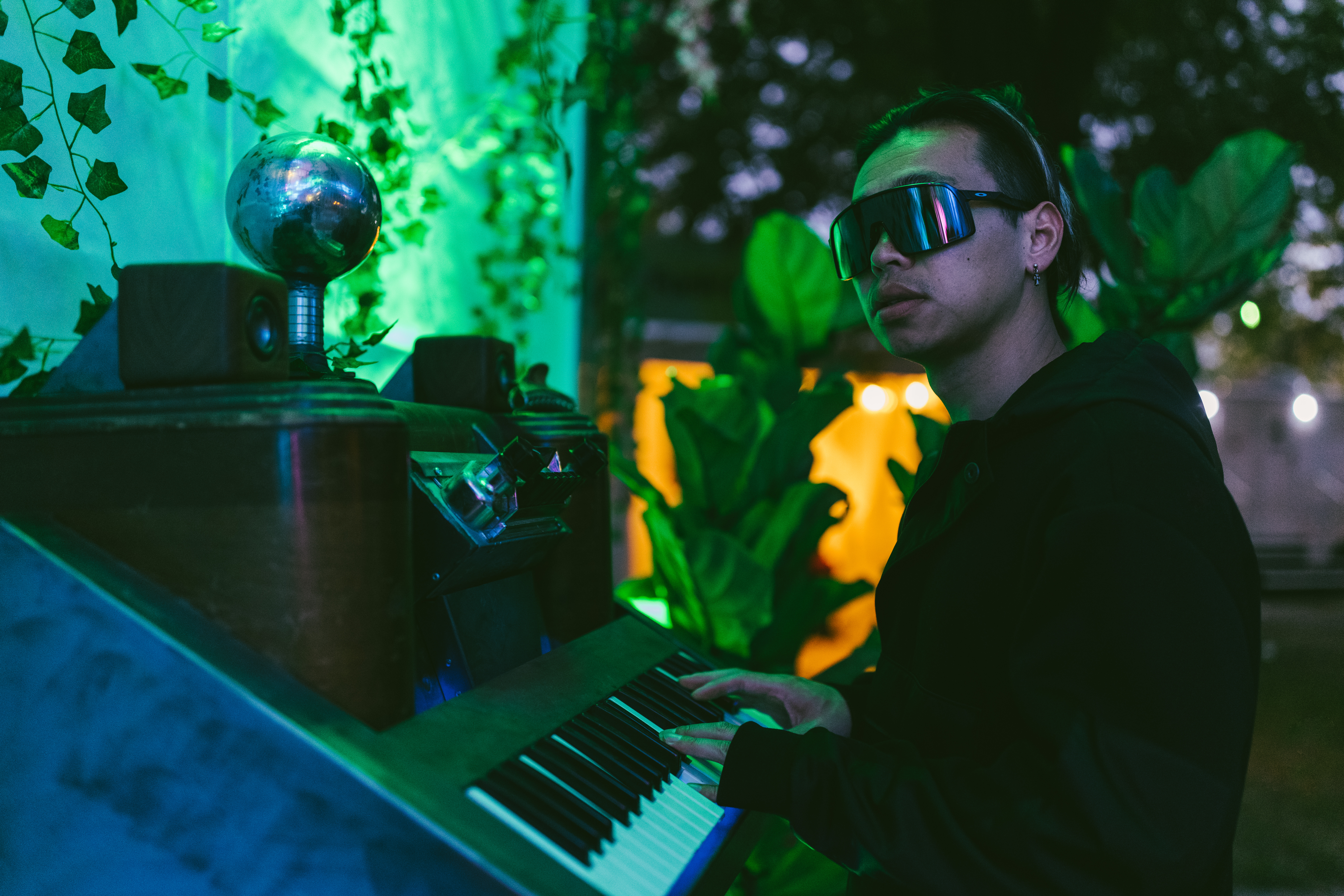 Zhu brought the house down with an extravagant set that utilized the entirety of the expansive Grid stage and played to a full audience packed with ebullient fans. Standing atop a 30 foot elevated build, the stage was set apart by his live band that included a drum set, guitars and a keyboard. Zhu appeared in a cape with an upturned collar that very much resembled a supervillain- specifically Zurg from Buzz Lightyear. The set continued with crimescape visuals and exclusive usage of red screens, and lights that penetrated into the crowd. Deep, cinematic bass drops built on themselves over and over again. Zhu stood atop the stage, swirling his cape and belting out his trademark high notes, delivering one of the most powerful performances of the weekend. 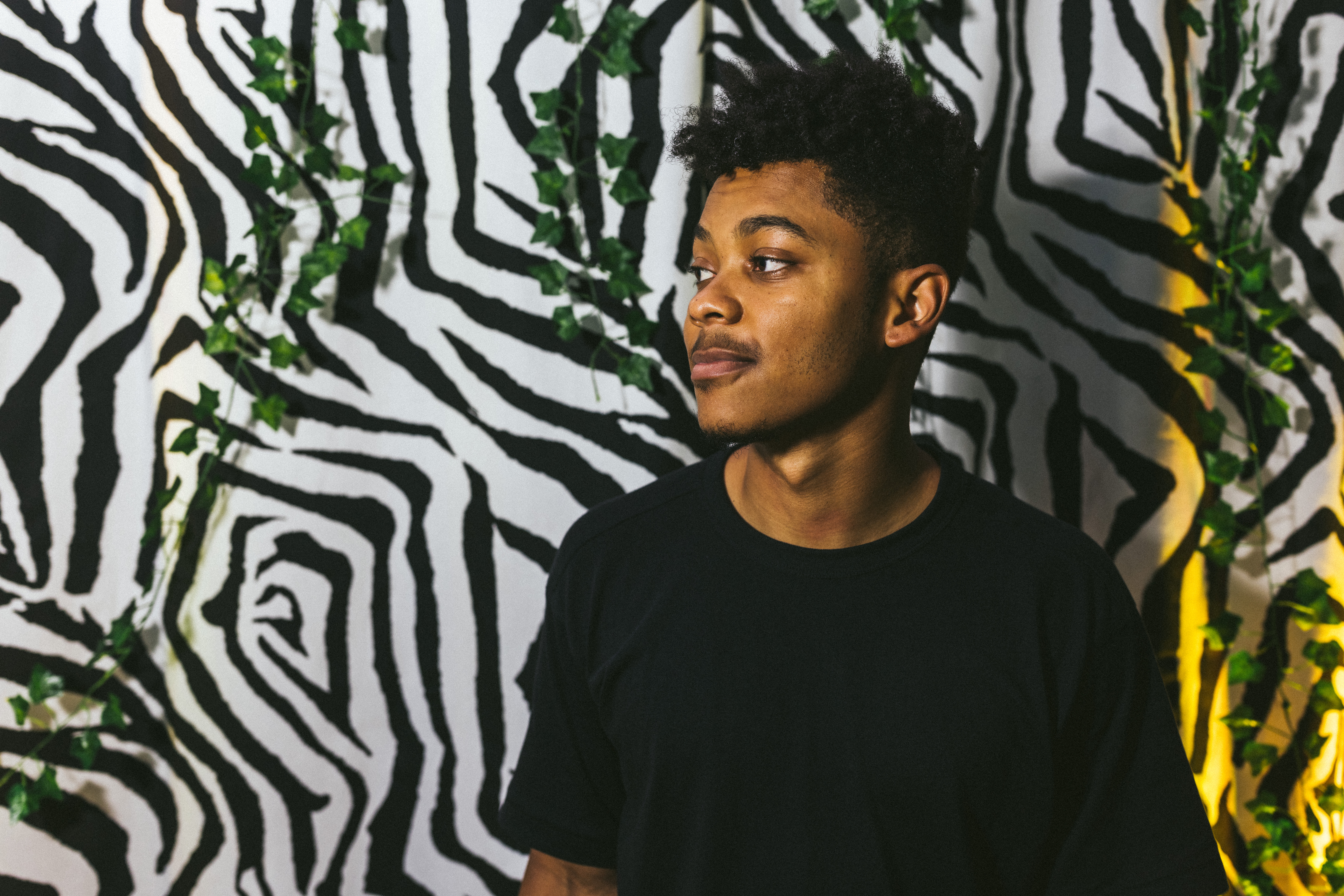 Mason Maynard performed a drum beat focused set under the elrow tent on Saturday. Layering feminine vocals over deep bass, Mason created a discordant, energetic mix of sounds. Backstage in simple black, the artist told us about his history of mixing soulful RnB “for the girls” and heavy-hitting swing drums and bass that has elevated his popularity. He prides himself on bringing people together with his music and seeing fans meet and interact who otherwise may have never known each other. 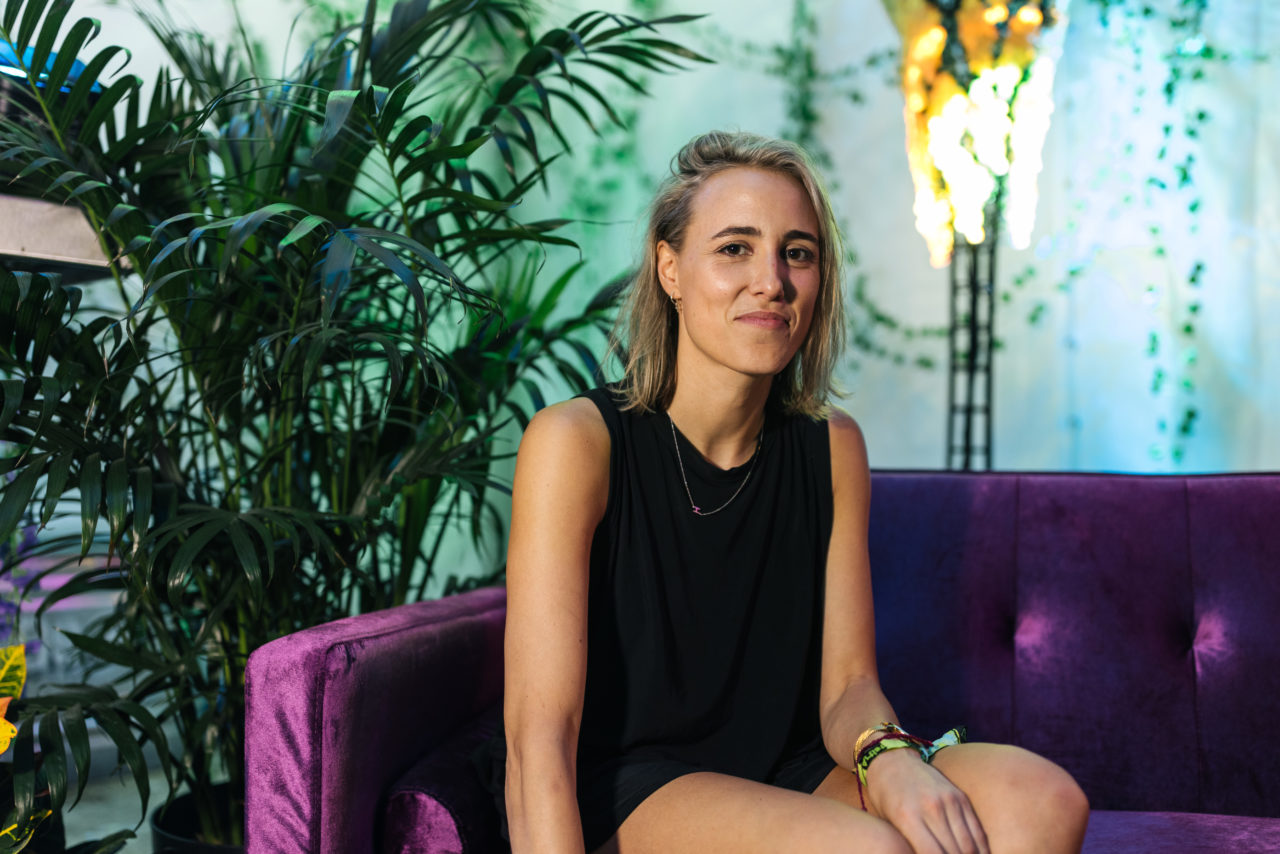 Eli & Fur delivered a trance-like, ethereal performance that was expertly placed in the funk zone that is the elrow stage. Their sunset appearance utilized vocal chop and echo, and was a bouncy, clappy, sweaty extravaganza. Eli was dressed in a simple, all-black ensemble as we met her backstage and shared that her favorite thing she sees from her fans are when they sing along to her music and now the songs. A genuine and passionate artist, Eli recommended the music of new artist Dino Gardiakos and was seen backstage supporting other acts during the rest of the festival. 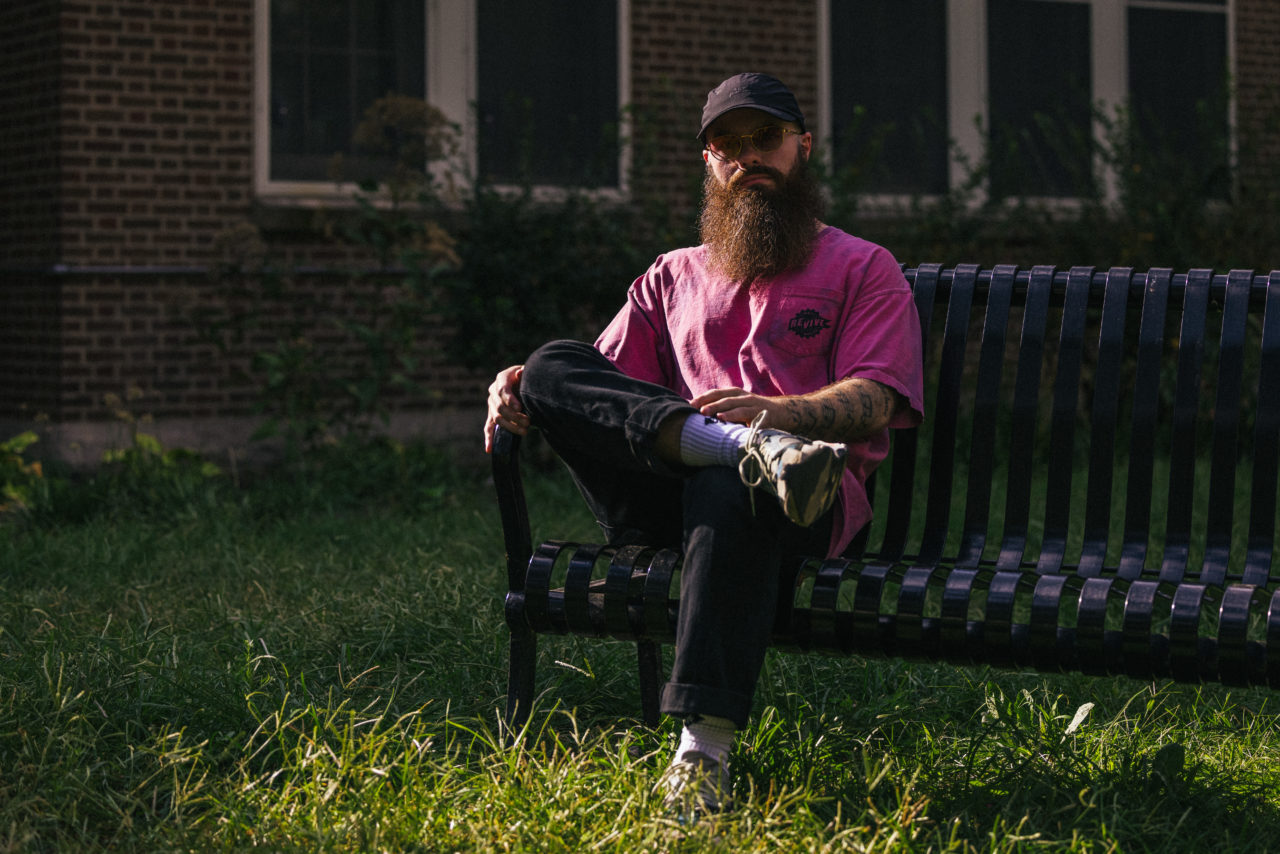 Credit: Will Clarke by Matthew Reeves for ARC Music Festival

Besides being physically unmistakeable, Will Clarke’s massive presence onstage is reflective of his star power and talent behind the tables. Will’s elrow set was amplified by confetti cannons and onstage dancers as fans poured in from other stages to get under the stage tent. Backstage, Will commented that he loves a crowd that is present; not on their phones, not recording or talking, but dancing and enjoying the moment for what it is. 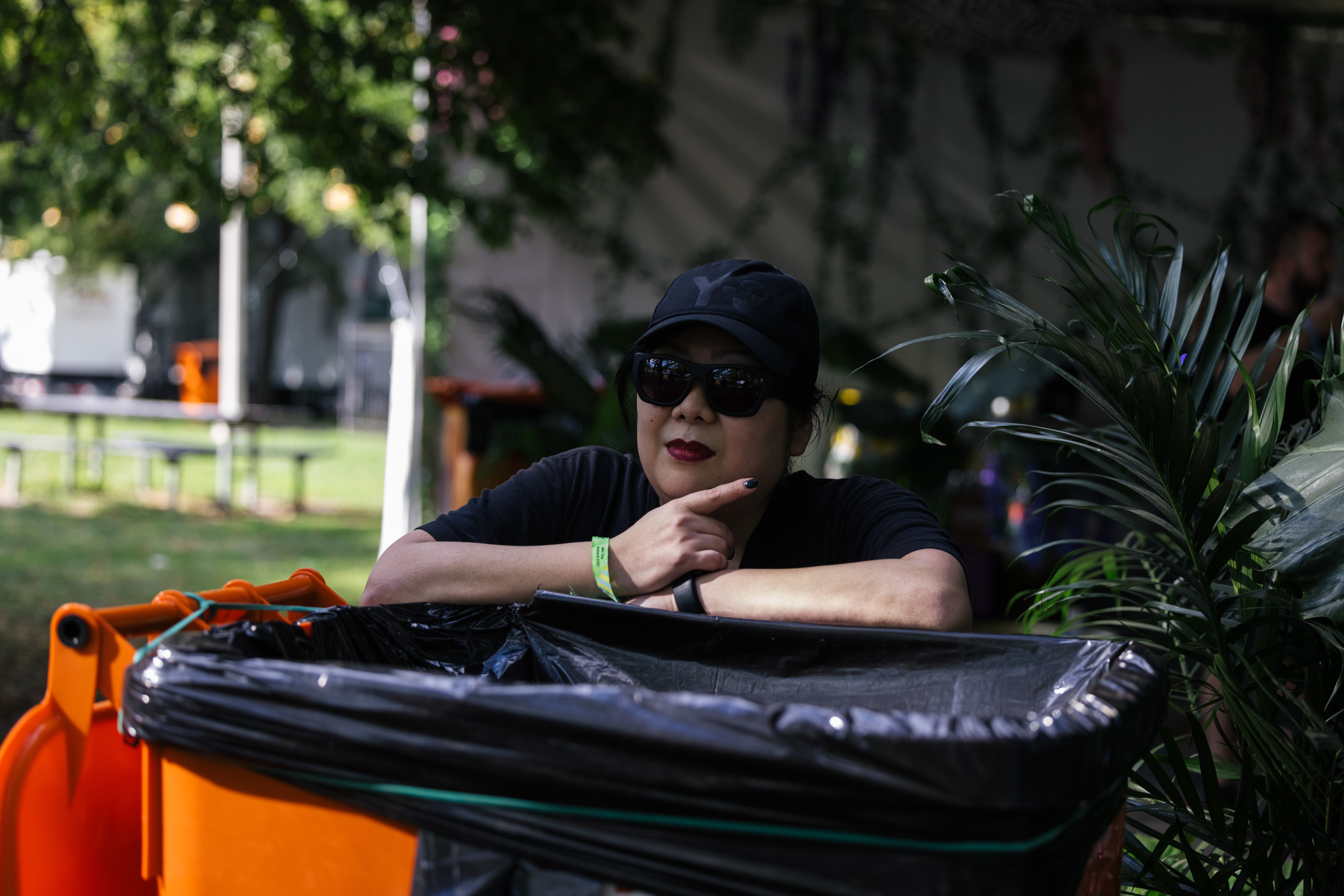 The meme queen herself and Chicago native Hiroko Yamamura took the stage at ARC Festival for an upbeat house set with DJ Holographic from Detroit. Being a longtime Chicago resident and resident DJ, Hiroko has seen many house music moments come and go, and has been “a customer since early on” of the genre. Hiroko tells stories of a backroom of the Riviera Theatre that once hosted LGBTQ house nights she would sneak into when she was underage and fell in love with the music. She states “one thing that;s really cool about Chicago and house is that it’s always crossed over with the industrial scene and created a diverse sound in house and techno”. 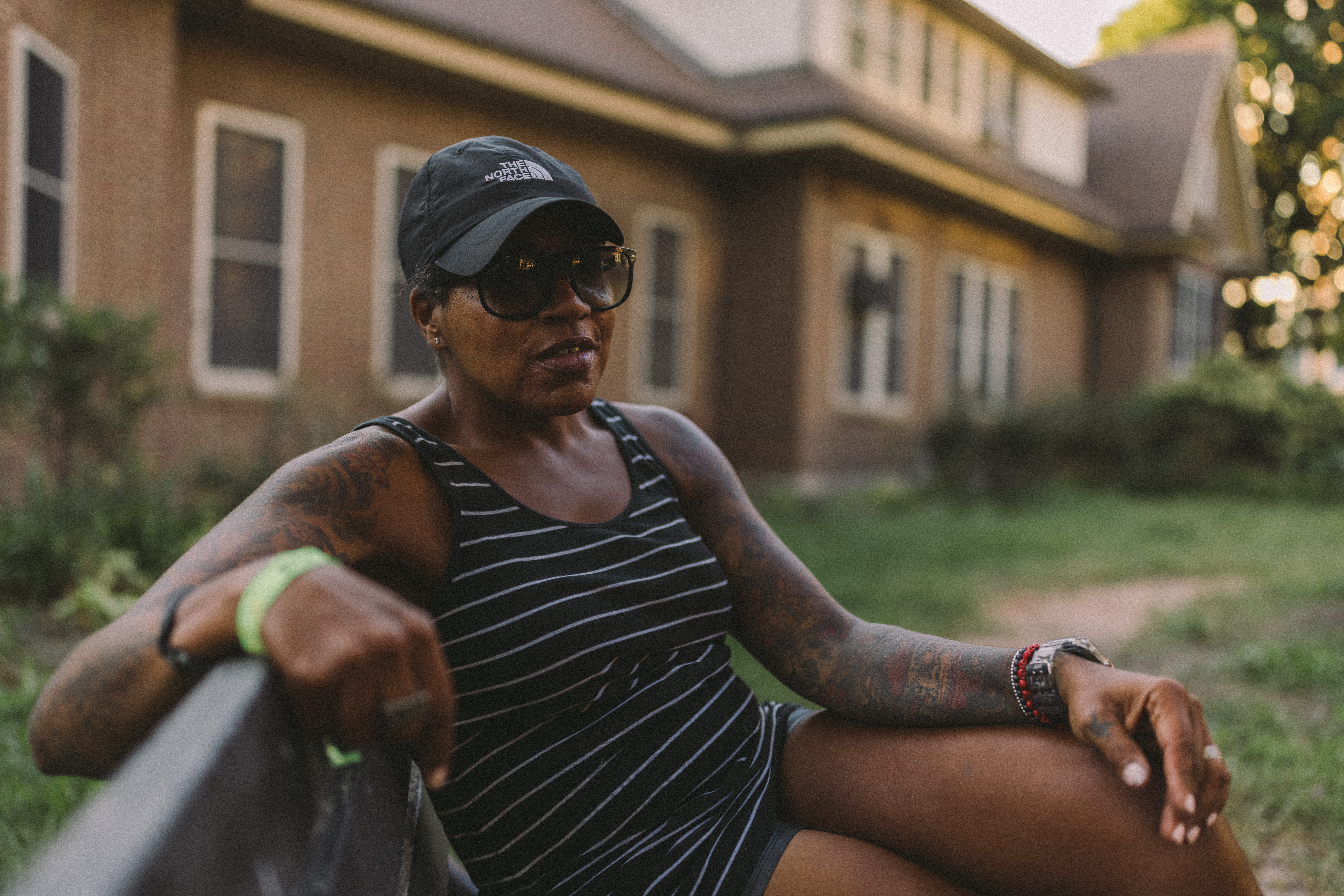 DJ Heather is a resident at the energetic nightclub Smartbar in downtown Chicago. Initially a hip-hop DJ, Heather’s music has transformed into a house style through years of positive feedback from her fans. Heather recalls many of her favorite nights in the club full of esteemed DJs getting together and mixing into the early morning. Heather described ARC festival as a “tip of the hat” to the rich house music culture Chicago has to offer. 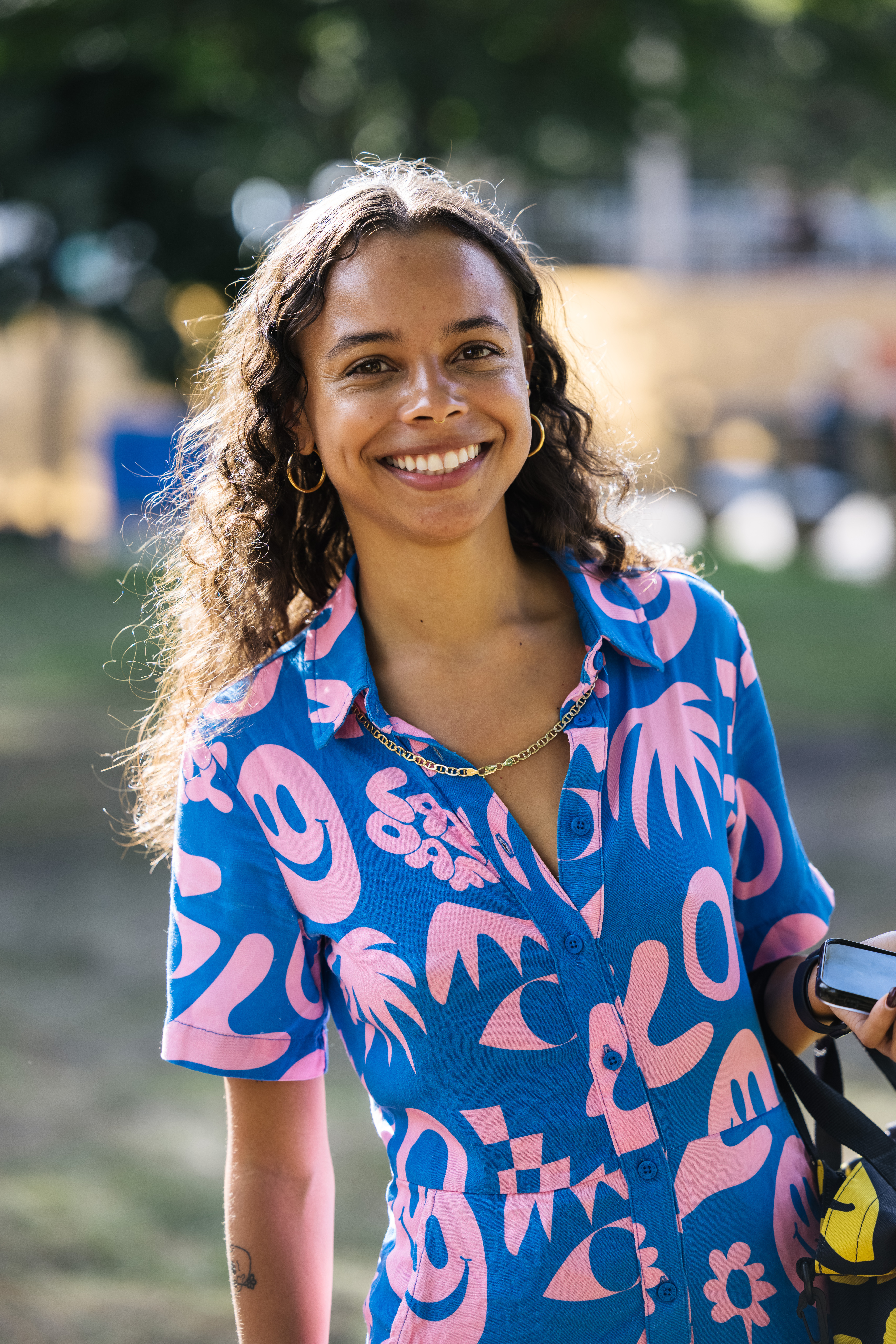 TSHA played an early afternoon set on the mainstage to a crowd of fans who knew her music well (one fan exclaimed that their entire group came in early just for TSHA’s performance). TSHA’s day set was perfect for her laid back music and she entered the stage in a blue and pink one piece and put on a positive, high vibrational show. The stage was stripped of bells and whistles and she stood alone behind her sound equipment, looking up and smiling at her fans in between spinning her music. TSHA’s sound is an energetic mix of chopped and pitched vocals set to synths and playful melodies and her celebratory music set the tone for the rest of the music to come on Sunday and ended in an ovation from the crowd.

The post The ARC Music Festival Debut in Chicago this Weekend was a Tribute to House Music’s Colorful Origins appeared first on SPIN.